The Earl's Wager is available in print and ebook formats at all vendors! 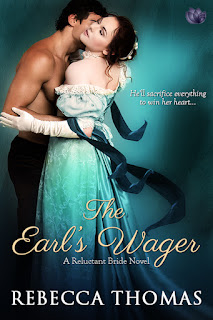 One headstrong miss. One stuffy lord. One friendly wager. What could go wrong?

Will Sutton, the Earl of Grandleigh, believes he can save the family’s impoverished estate by investing in a racehorse, but the price is too steep. His brother-in-law offers him a deal: tutor his American ward in proper English customs, so she’ll be marriage material, and Will can have one of his horses. Maybe Miss Georgia Duvall prefers being a jockey, is obstinate and high spirited, but once she’s cleaned up and presentable, he’ll have no trouble finding her a quality suitor. She might even be quite pretty beneath the racetrack dust.

The last thing Georgia Duvall wants is to be married off to an English peer. But she won’t defy her father’s wishes, and sets her cap for the oldest lord she can find—a man who’ll die quickly and leave her alone to manage her inheritance. The Earl of Grandleigh might think he’ll teach her manners and marry her off to someone younger than eighty, but there hasn’t been an obstacle yet Georgia can’t overcome. Including a stuffy, overbearing English lord. 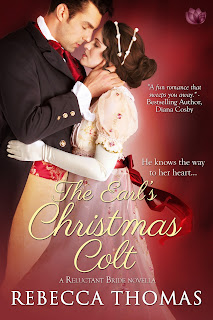 Lady Arabella Sutton is stunned to learn her brother has betrothed her to a stranger despite his promises for a season in London. Although she is the first to admit no man would suit, since she’s more interested in horses than marriage, the last thing she wants is to become a brood mare to a stuffy old earl. Facing a future she cannot abide, she takes an impetuous ride to clear her head and ends up tending her injured mare instead.

Oliver Westwyck, the Earl of Marsdale, can’t believe his luck when he stops at an inn the night before he’s to meet his fiancée. In the stable, while tending the colt he intends to give to his future wife, he happens upon her—rain-drenched but beautiful. She assumes he’s a stable hand, a fine joke he means to end…until Lady Arabella declares all noblemen are egotistical, conceited, and arrogant. How can he reveal his true identity before he’s managed to change her mind and win her heart?